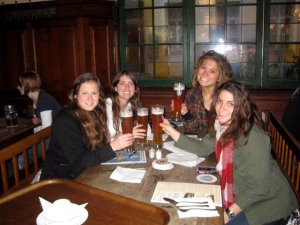 Cheers!! GERMANY wins the world cup for the first time since 1990 – the year I was born ! Germany is the first European team to win in South America, so this is history! There are ye’ old superstitions about what country wins in what country that hosts. People believe that now the cup will stay with a Euro team for the next few years to come!

I was in fact cheering for Germany all along, well since Spain got the cut from the World Cup 2014. I do find that my connection with Futbol aka Soccer to us Americans is deep routed from my abroad experience in Barcelona Spain.

European countries dedicate their heart & soul to their soccer teams. When I used to watch and attend games in Barcelona, the whole city transforms. Even more so than a Football Saturday in Ann Arbor! Residents of Barcelona line the streets trying to get a glimpse at the Television inside a local bar or restaurant. Shops open their doors and chairs line up  into the streets. When FC Barca wins people climb street poles , set off fire works and chant & sing throughout the streets 😀

Guess what everyone it’s 2014 and Germany is not ALL natzi’s !!  People fought me long and hard for wanting Germany to win! Honestly, pulling the Natzi card  is not a legitimate reason for people to be against Germany winning.

One of my best friends growing up was from Germany, she moved to Michigan in the 4th grade, it was so awesome when I was able to meet up with her in Germany when I visited.

For not watching it live in Brazil, I think I had the BEST alternative to watching the game. Outside in a cabana at my friend’s fabulous apartment !